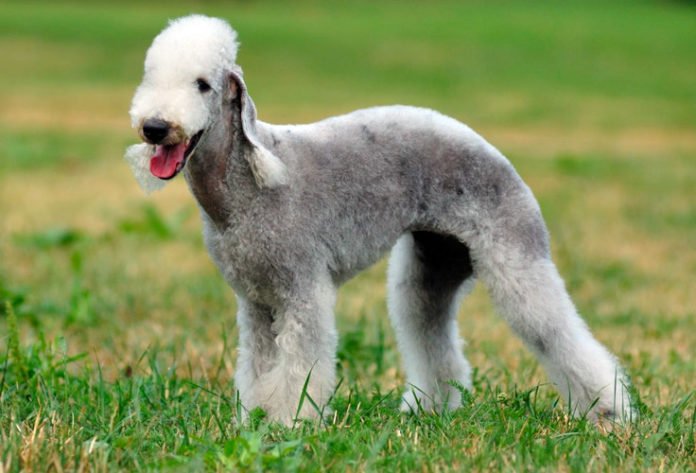 Let’s get to know the Bedlington Terrier, a dog that certainly does not go unnoticed by its peculiar and characteristic appearance.

The Bedlington Terrier is definitely a dog that does not go unnoticed by its aspect. At first sight, it looks like a little sheep instead of a dog; this is due to its pear-shaped head, and curly and thick hair.

This dog has British origins, it was created from the idea of some miners of crossing three dog breeds: Dandie Dinmont Terrier, Otterhound and Whippet. The result was a Terrier with a thin body structure and the classic arched back of a Sighthound.

The Bedlington Terrier is a dog breed recognized by the AKC and the FCI with the standard number 9. As we mentioned before, it is a dog with a peculiar aspect that can easily get confused with a little sheep. Its name comes from the mining town of Bedlington, in the county of Northumberland.

However, it was discovered that this dog breed is not completely native of Bedlington. There are many theories about its true origins; one hypothesis says that some textile workers imported the first specimens from Holland at the end of the 18th century.

One certain fact is that this dog breed’s ancestors come from the north of England, on the border of Scotland. Another thing we can assure is that one of its ancestors is without question the Dandie Dinmont Terrier, a dog breed raised by the Duke of Antrim.

This dog breed stayed unnoticed until the beginning of the 19th century. By 1825, in Great Britain the number of specimens started to rise. Throughout the decades, the Bedlington Terrier gained popularity, especially among the miners. It was mainly used to hunt hares, foxes and rabbits; and it was also used as a racing dog.

Its morphology has evolved through time; in fact, this dog has become taller and thinner in comparison to the first specimens. By the 20th century, it was one of the most popular dog breeds, and it was the most wanted among the high society wealthy people that found in it a beautiful companion dog.

The dog breed first appeared in Bedlington, in a dog show in 1876, and during this time its first Club was created. 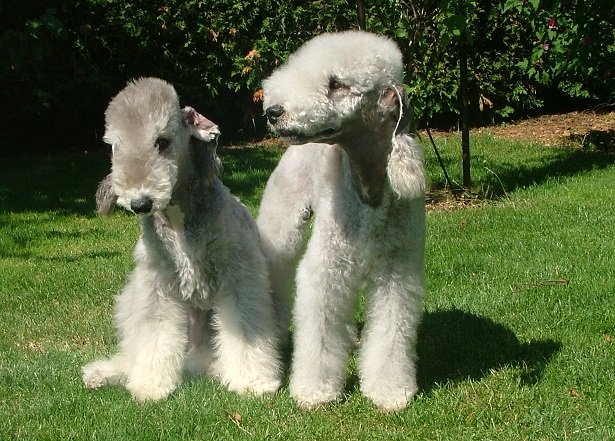 The Bedlington Terrier is a funny, agile and well-muscled dog, that does not show any signs of weakness or vulgarity. Its head is cuneiform with a relaxed, quiet and trustful expression. Its body is longer than taller.

The head is covered with a lot of hair, generally white-colored. The skull is narrow but tall and round-shaped. The nose has wide and well-defined nostrils. The blue or steel blue specimens must have black-colored noses, while the sand and red-brown specimens have brown-colored noses.

The eyes are small, triangle-shaped and very shiny; their color can change in relationship with the color of the coat. Blue specimens have dark eyes; while sand or brown specimens have light hazelnut-colored eyes. The ears are quite big; they are placed in a low position, and adorably hang by the sides of the cheeks.

It has a thin and muscular body structure, covered by short and thin hair with lovely locks of hair on the ends. The neck is long and narrow. We can say that the body of a Bedlington Terrier is well-muscled and flexible, with a wide and deep chest. The tail is quite long, thick on the base and then it narrows on the point; it is curved, and it is always in a low position, never over its back.

The front legs are straight and more spaced on the chest than near the paws; while the back extremities are more muscled and slightly longer. It is a dog capable of running at great speed; and it has a very characteristic way of moving, with light, flexible and small steps.

The Bedlington Terrier has a peculiar coat: it is thick, soft, ragged and puffy; it is not rough at all. Its hair can get easily tangled, especially on its head and muzzle.

The allowed colors of the coat are:

The coat must be brushed at least once a week, and trimmed completely every two months, to avoid entanglement. You can find more information about hair grooming in our article: Stripping and Trimming in Dogs.

One important piece of advice: you must pay extra attention to its ears, they must be cleaned regularly to avoid infections; but in general we can say that this dog breed can enjoy good health for many years.

One interesting curiosity of this dog breed is that it is one of the recommended dogs by the American Kennel Club to people with dog allergies. 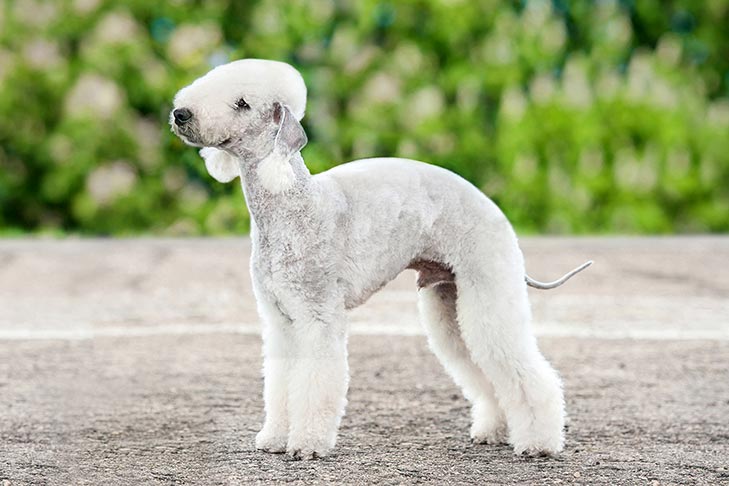 The Bedlington Terrier is a cheerful and active dog, besides it is patient and quiet. It is a very sweet and affectionate dog that enjoys family life. It can become very attached to its owner, and it is particularly protective with him.

Its relationship with children is excellent, it loves to play with them, and it is tender and patient. It is never aggressive in the presence of kids. However, it is mistrustful with strangers and it can be very hostile with them at first.

In general is a cheerful, lively, tame and quiet little dog. If you train it since puppyhood, you can take it anywhere. It is necessary to go for walks at least three times a day. At first, this dog breed was used for hunting, and for this reason it can be instinctive. The Bedlington Terrier’s intelligence makes it very easy to train, even though sometimes it can be a little stubborn.

Bedlington Terrier: Relationship with the Owner and with Children

The Bedlington Terrier can adapt perfectly to family life, because of its loyalty and affection. It tends to have a strong bond with its owner, and gets very attached to him, to the point of being willing to defend him with its life.

Even with children is a trustful friend; it plays with them showing love and it is never aggressive or impulsive. It always has a gentle and kind manner of expressing itself. However, as we said before it is cautious with strangers, but it never shows signs of anger, on the contrary it is determined but fearless. In general, it is a very quiet dog, but if its family gets threatened, it will not think twice before taking action.

As we mentioned before, the Bedlington Terrier is very smart, so it is quite easy to train, although it can be a little stubborn. If it is trained properly since puppyhood, you can take it into travels and to explore new places. Because of its hunting nature, it can be instinctive and sometimes act a little strange. It loves running in open spaces; keep in mind that it needs to go outside to unwind at least one or three times a day.

It is a very proud dog, and all this pride can be seen in the way it moves and stands which is absolutely elegant. 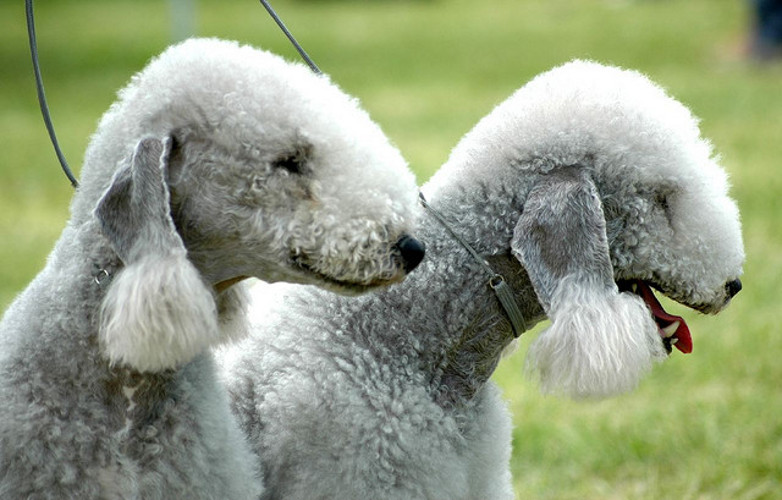 We can say that it is not a widespread dog breed in some continents, and there are not many well-known breeding establishments, so it is quite expensive to purchase a puppy.

A Bedlington Terrier puppy can cost around 1300 dollars, 1000 English pounds, or maybe more; the fact that it is not a worldwide spread dog breed does not make it particularly cheap. 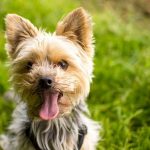