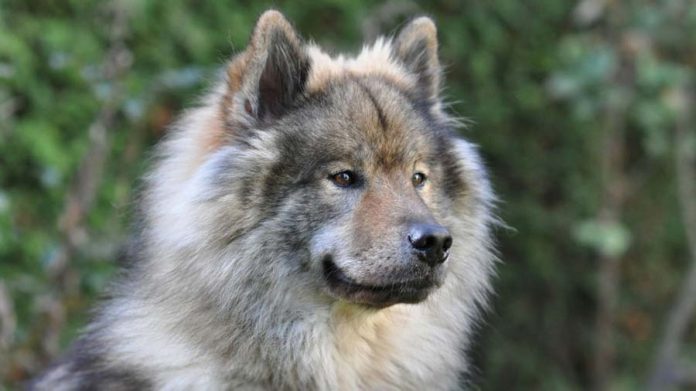 The Eurasier is not a well-known dog breed, and it is often mistaken with the Chow Chow: Let’s see all of its characteristics.

Today we are going to talk about a not so popular dog breed that was developed recently. The Eurasier is considered a family dog, its origins are from Germany; although it does not have a lot of fans yet, it seems to possess the perfect characteristics to be in all houses around the World.

Why are we talking about a recently developed breed? The Eurasier is the result of a well-balanced crossbreed of different dogs during the second half of the 20th century. It is not 100% confirmed, but it is said that the Eurasier was created due to a well-known character; the famous ethologist Konrad Lorenz, a scholar that dedicated many years of his life to study our four legged friends.

Probably, among other things, many remember him from his best-seller and classic book: Man Meets Dog. We bet a lot of our readers have this book in their homes!

So, Was Lorenz the One Who Came Up With the Idea of Creating the Eurasier?

In order to prove this first intuition about the academic ethologist, two erudite lovers of German Dogs were required , we are talking about Julius Wipfel and Charlotte Baldamus, in collaboration with the University of Göttingen (to adjust the genetic components of the breed) and the Max Planck Institute for Astronomy in Heidelberg (to create the behavior setting).

But what did this group of scholars do exactly? Which dog breeds were used for this research and work? The family tree of the Eurasier includes the crossbreed of two main breeds. Then a third dog breed was added to balance the behavior and some characteristics that completes the Eurasier’s identity. 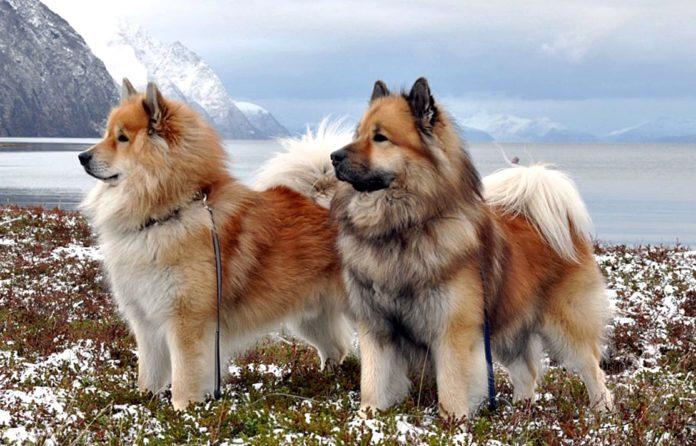 But let’s put this matter in a chronological order: during the second half of the 20th century the mix of the Chow Chow and the Wolfspitz gave life to the Wolf Chow. However,experts were not completely satisfied with this animal, so they decided to crossbreed the Wolf Chow’s offspring with the Samoyed Dog.

A few years later, in 1973, the Eurasier was officially recognized by the FCI (Federation Cynologique Internationale). Since its beginnings, this breed has had a slow scaling, but surely it will gain popularity in the next few years.

For the time being, however, the Eurasier is difficult to acquire; and unfortunately it is often confused with a weird-looking Chow Chow. (it is similar but it does not have the same peculiarities of a pure Chow Chow) But after all, the Eurasier and the Chow Chow are related!

Let’s talk in detail about the esthetic characteristics and temperament of the Eurasier, so we can understand clearly the differences with its most popular cousin the Chow Chow. In fact, without any surprises, the Eurasier is a summary of all the dog breeds that contributed to its creation, on a physical and emotional level.

But let’s go in order and “take a picture” of the Eurasier. The first striking feature that comes to mind is its full, soft, delicate and fluffy coat. However, it is also a large, robust and muscled dog. In general, it is a well-balanced dog, with harmonious body proportions.

Its head is large and conned shaped but not too thick; the ears are triangular shaped with a slightly round point. Besides, its muzzle is not too pointy and ends in a black colored middle sized nose.

The eyes are quite big and dark colored, but they have a peculiarity: they have a shadow that resembles a black line in the edge, very elegant in terms of esthetic, this makes the Eurasier look like it has make up on.

And How Much Can a Eurasier Weigh?

In general its weight does not exceed 65 lb (30 kg) and its height can be of 22 inches (56 cm). The height and weight can be less in female dogs. Thereby, the Eurasier is part of the large-sized dog group.

Now let’s move on to the most particular feature of this dog breed, its beautiful coat; it is elegant and the Eurasier shows it with pride and happiness. The undercoat and overcoat are very long and thick which gives this breed a truly irresistible harmony.

It is only missing a mane to look exactly like a lion! If you are looking for an animal that resembles a giant teddy bear, the Eurasier is without any doubt the perfect choice and a little different from the rest of the dogs.

Even its tail is big and distinguished. As for the variety of colors, the breed allows almost everyone: 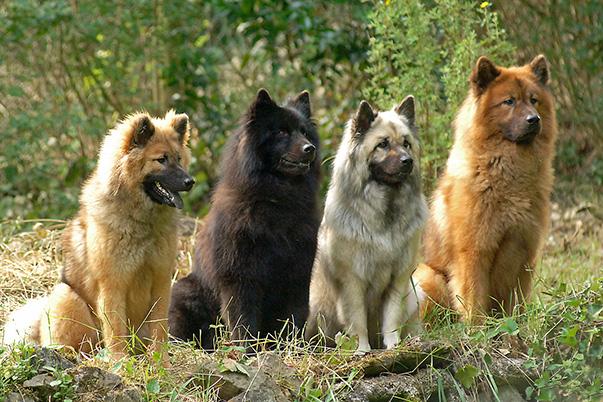 There are some white and liver (a brown red color mix) varieties.

Now let’s analyze its behavior. The Eurasier, in many ways, is the perfect family dog, especially to guard a house.

During the first interactions it can be a little shy, but is not the kind of dog that isolates itself, it can be proud, peaceful, and always elegant and reflexive.

Due to its combination of genes it is a well-balanced dog. In fact, it is not prone to rage attacks or getting angry, it does not bark without a good reason or gets nervous easily. But beware: although it seems calm and composed, it is far from being dull.

In fact, it looks like it has everything under control, always alert and helpful. These characteristics make it an excellent companion dog (attached to its entire family, including children if they are not noisy and rowdy) and also a perfect guardian dog.

With its loved ones it is sociable and loves to cuddle, but with strangers it is more distant. In any case, it can be a little sensitive; moreover, if you train your Eurasier make sure to be understanding and patient, do not give it strict orders, the situation could get worse. 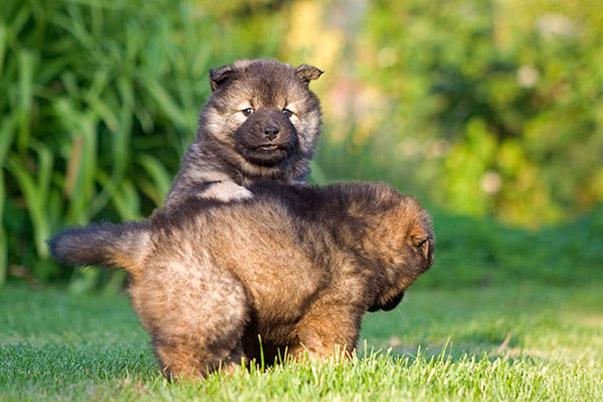 As we mentioned before in this article, it is not a popular dog breed. And given its German origins, it is a lot harder to acquire.

First of all, Eurasier’s puppies are usually confused with Chow Chows. Make sure to carefully check the dog’s pedigree. And, as always, we recommend acquiring your puppy only with certified breeders.

A Eurasier puppy can is not pricy, taking into account all its magnificent physical and psychological characteristics; you can probably get one at 900 dollars, approximately 800 English pounds. 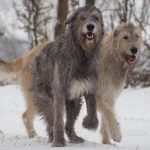 The Irish Wolfhound is the bane of wolves in Ireland

Gigant Dog Breeds Julieta Belén Salvático 0
The Irish Wolfhound, also known as the Irish dog, the Big Dog of Ireland, the Greyhound of Ireland, The Wolfdogs of Ireland, and the... 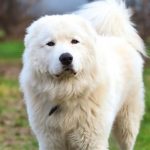