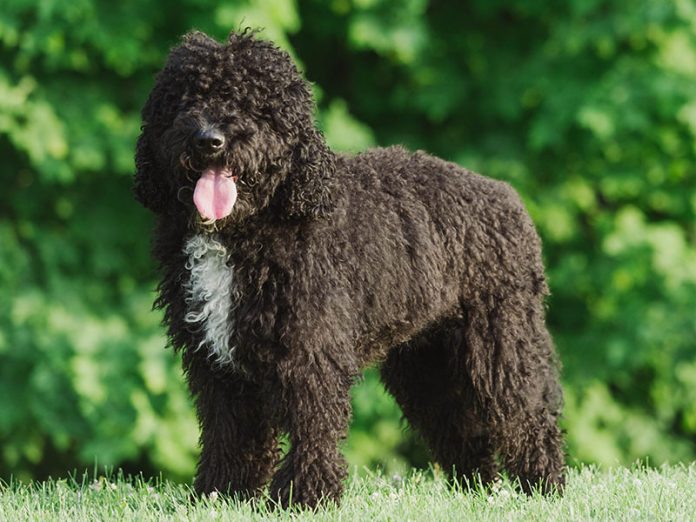 The Barbet, if it remains static, can easily be mistaken for a teddy bear. This is thanks to its thick, woolly and soft coat that covers it completely. A distinctive beard complements the physical appearance of this teddy bear.

Today it is an excellent companion dog, but the Barbet was originally a hunting dog for water areas. Native of France, it is defined as an “aquatic dog” because it always dives into the water, no matter if it is cold or warm because its thick coat protects it.

Today, the Barbet is considered a companion dog and it has adapted very well to this role, as it lives happily with its family. It is easy to love because it has an incredible sweetness.

It gives love and affection to anyone who shows it attention. The Barbet would always play without being aggressive or violent.

Some of its defining characteristics are: easily trainable, affectionate, loyal, clean, and adaptable. It seems to be the perfect dog, and perhaps in a sense it is as it is really hard to find a flaw in this breed. Only if it falls into the hands of a violent or careless owner or incompetent breeders could its balanced temperament have a negative impact.

But if you know how to love it and accept everything it has to offer, then the Barbet is the ideal companion dog for the whole family.

The French Water Dog is a descendent of the ancient “canis acquaticus” and there are several hypotheses as to how this breed of dog arrived in France. It seems that it is the great-grandson of the Saracens’ dogs, who came to the land that had first belonged to the Gauls in the wake of wars and invasions. Therefore, it would be a dog breed introduced in France from the Iberian Peninsula.

It has always been used as a hunting dog, especially in aquatic areas. For example, it shows genuine talent in duck hunting.

But Barbet is certainly not only known for this. This dog had access to the prestigious residences of the French upper middle class, becoming a beloved companion dog even today. 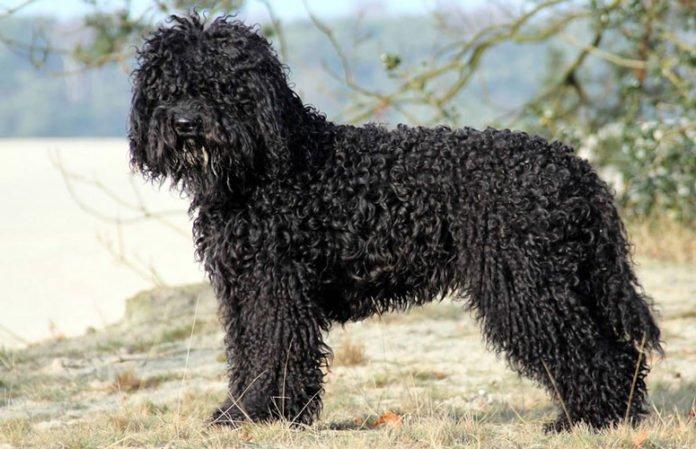 According to the FCI, the Barbet is in group 8: “Retrievers, Flushing Dogs, Water Dogs”. It is not a very widespread breed in the United States, Canada or Australia, but it is a dog breed that is still very popular in its native country. The Barbet was recognized by the AKC in January 2020 and is its 194th breed.

In many portrayals, we can watch the French Water Dog on duty with French hunters. The characteristic features of this breed were preserved over time. However, we cannot say the same about its name: This breed was formerly known as Barbillotte.

Today, the French water dog or Barbet is a dog used by only a few enthusiasts. From puppyhood, it is trained to be used as a hunting dog. It moves very well in swamps or in environments with water. However, it is not just a hound dog. Their job is to search for prey hidden in the aquatic vegetation and bring them out.

Then, it takes the animal to the owner who fired the shot. It is a dog that is not afraid of the cold and dives into the water without problems at any time of the year. It is not afraid of anything and it is very resilient. The Barbet can stay for hours in the water during the hunt.

This breed is actually a multi-purpose dog. In addition to being a hunter, especially in aquatic environments, the Barbet is a herding and companion dog.

Nowadays, it is used mainly as a pet dog, since although it has few rivals in aquatic hunting, the Barbet cannot be compared with dogs specially selected for hunting, such as the English pointer or the English setter.

As a companion dog, it is calm and affectionate with the whole family. It conquers hearts with its cute and playful appearance. Its coat makes it look like a real cuddly toy.

The Barbet is a medium-sized dog of the mediolinear type. From the morphological point of view, it is part of the bracoid breeds. This dog breed is undoubtedly distinguished by its thick coat that is woolly, wavy, curly, and soft. Its coat covers its entire body, including the head and legs.

The Barbet dog can be found in the following varieties of colors:

Its particular beard is the reason for its name. 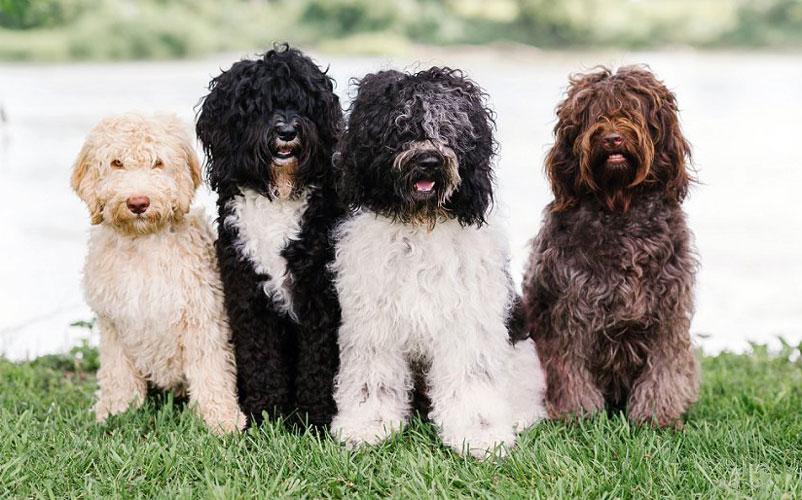 Underneath all that coat, there is a robust dog with excellent muscular and bone build. The head is prismatic in shape, while the muzzle is slightly square and shorter than the skull. The muzzle is black. The eyes are round and generally dark brown in color. They give it a lively and intelligent expression.

The ears are set low and they are almost hidden, as they are covered with hairs. The Barbet has a strong and short neck.

This breed has a well-developed chest with a strong round rib cage. The tail is set low and curved inward in a characteristic hooked shape. It has an imposing but never rough gait.

The French Water Dog or Barbet is an ear-sensitive dog as it often suffers from ear infections. In order to avoid those infections from happening, you can read our article called: Some tricks to clean your dog’s ears.

But that aside, it is a dog that is in generally good health. Their average life span is 13 to 15 years.

The Barbet is playful, lively, and easy to train thanks to its outstanding intelligence in learning commands. It is also very docile and tame.

Fearless and easy to love, it is a very well behaved dog. This dog that looks like a giant stuffed animal is very attached to its family and it won’t refuse to be pampered by anyone who has affection for it.

The Barbet is really fond of children. It gets along very well and it is always willing to play with them without being aggressive. This is a super-clean breed. A characteristic that makes it particularly suitable for domestic life. It is considered a model of adaptability and sociability.

Loyal and friendly, the Barbet has an absolute devotion to its owner. This dog breed always needs a cuddle or a little attention. This dog is for all kinds of people, as long as they are willing to give it a lot of love.

The Barbet loves being outdoors for playing and burning its energy through games. We can say that it is an energetic breed. Indoors it is a big sloth and an expert at lounging on the couch. Despite being territorial towards its home, the Barbet is a dog that knows how to socialize with other pets as long as they understand that it is the leader. 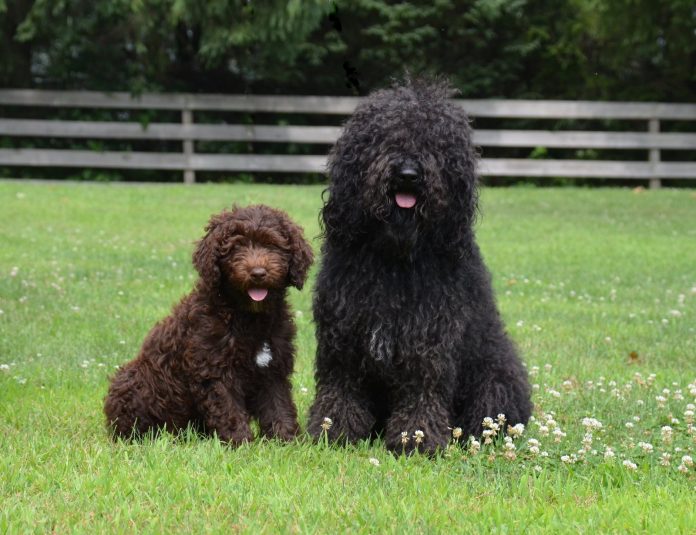 Barbet: Puppies For Sale, and Price

The price of a French Water Dog puppy or Barbet puppy is not easy information to find. It may cost around 800-1200 dollars, about 700-1000 English pounds. We recommend that you contact reliable breeding establishments to find out if they have this breed of dog available for sale.

It is important that you ask them for the correct documents, pedigrees and certified health controls of your puppy. 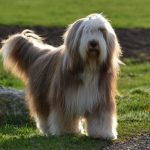