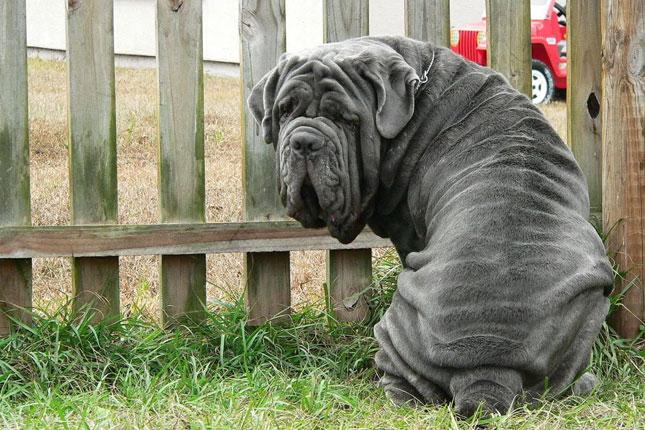 The Neapolitan Mastiff is one of the most famous dogs in the world. Let’s find out more about his Molosser.

The Neapolitan Mastiff is perhaps one of the most popular dog breeds in the world, a giant breed that became a truly iconic dog. It is classified in the molossoid group, together with the Pinscher and Schnauzer. It has a glorious past, but it has not always been known by the name we know today.

In fact, the name “Neapolitan Mastiff” began to be used in the middle of the 20th century. Previously, this breed was known by the term “perro de presa“, or by expressions such as: “Italian molosser” or “mastiff dog“.

Needless to say that, as its name implies, the Neapolitan Mastiff comes from Italy, precisely it is a typical breed of the South of the Italian peninsula. But let’s try to find out a little more about its origins.

Neapolitan Mastiff: The Story of a “Neapolitan Lion”

The Neapolitan Mastiff is a dog breed that derives from the rustic molossers, like the Great Assyrian-Babylonian Molossians. The breed spread widely during the Roman era and reached all parts of Europe.

Because of its size, the Neapolitan Mastiff was often used as a guard dog or “soldier dog” to fight against the enemies of the Savoyard troops. It is a dog with a strong genetic build that was, however, endangered at the beginning of the 20th century.

Its definitive renaissance, if we can define it as such, took place mainly in Campania, between Naples and Avellino. The Neapolitan Mastiff is a kind of Lion of Southern Italy. 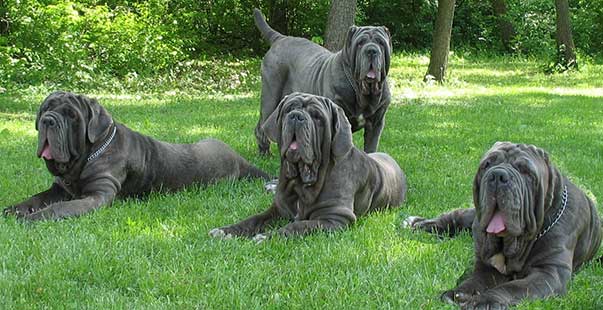 How does the Mastiff Neapolitan get on with humans? How is the temperament of this breed?

We are in a classic example where looks can be deceiving. The Neapolitan Mastiff is a giant-sized dog.

However, it is very protective of its home and its “adoptive family”. Its size can frighten any opponent. In addition, it is considered one of the best guard dogs.

Rarely do episodes of aggression occur for no apparent reason. This breed can be defined as being very loyal.

Contrary to what it may seem, it is a fast and agile dog. Although not a greyhound, the Neapolitan Mastiff is neither clumsy nor slow.

Moreover, it is not lazy or sedentary, as you might believe from its “peaceful” appearance and “eyes with eyelids not wide open”.

In general, the Neapolitan Mastiff is healthy. However, it may suffer from diseases that are typical of large-sized breeds, such as hip dysplasia or gastric torsion. Life expectancy of this breed is 9 to 11 years.

Bone and joint health is an important issue in this dog breed, especially during the growing stage, so you must be attentive. The Neapolitan Mastiff also tends to drool a lot.

How does this breed get along with children? The Neapolitan Mastiff has an excellent relationship with children. However, just because it is patient does not mean that its large size does not represent a danger, so you should keep an eye on it when playing with children so that it does not hurt them unintentionally. 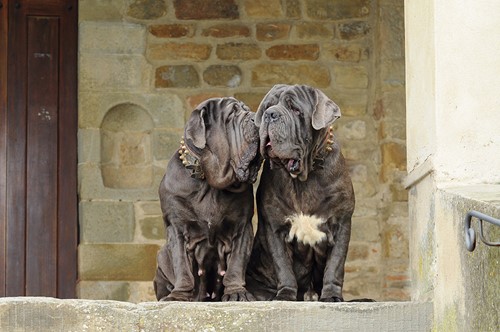 It is important to clarify that it is not an easy breed to handle. Although it is not an aggressive dog, it has a strong and determined temperament.

It has a big heart and a great temper. Its owner must be consistent and coherent during the Neapolitan Mastiff training. It is also important to socialize it with other dogs from puppyhood, otherwise it may have difficulties when interacting with its four-legged friends.

Another characteristic of this breed is that, although not dangerous, it could be quite annoying. When it eats, for example, it soils everywhere and drools. In addition, it snores and has flatulence problems. All of these things can be forgiven due to your love for your four-legged friend!

What about from an aesthetic point of view? What are the characteristics of this Molosser? Let’s start with its weight and size. Male Neapolitan Mastiff is 25-30 inches (65-75 cm) tall and it may weigh up to 165 lbs (75 kg). These dimensions are the ones that make it fall into the category of giant size dogs. The female Neapolitan Mastiff is slightly smaller in weight/size.

The Neapolitan Mastiff has a physical appearance according to its size. For example, it has a large head and a large and slightly flattened muzzle with large nostrils. The most clearly noticeable detail of this breed is the wrinkles or folds on its face. They give it a fun and innocent look. But remember, looks can be deceiving and just because it looks cute doesn’t mean it has a good temperament.

Its eyes are small and well-spaced. They often have a bluish tint to the iris, which gave it the nickname of: “Ice eyes” Both its teeth and its bite are powerful. The tail has a fairly robust base, but then it becomes sharper towards the tip.

The gait is quite special: when walking, it has a rhythm that resembles that of a bear, but when trotting, it has a good stride; however, it almost never gallops. The color of its coat tends to vary in shades of gray, lead gray and black, but also brownish or reddish. Sometimes it has white spots. All colors may be brindle. 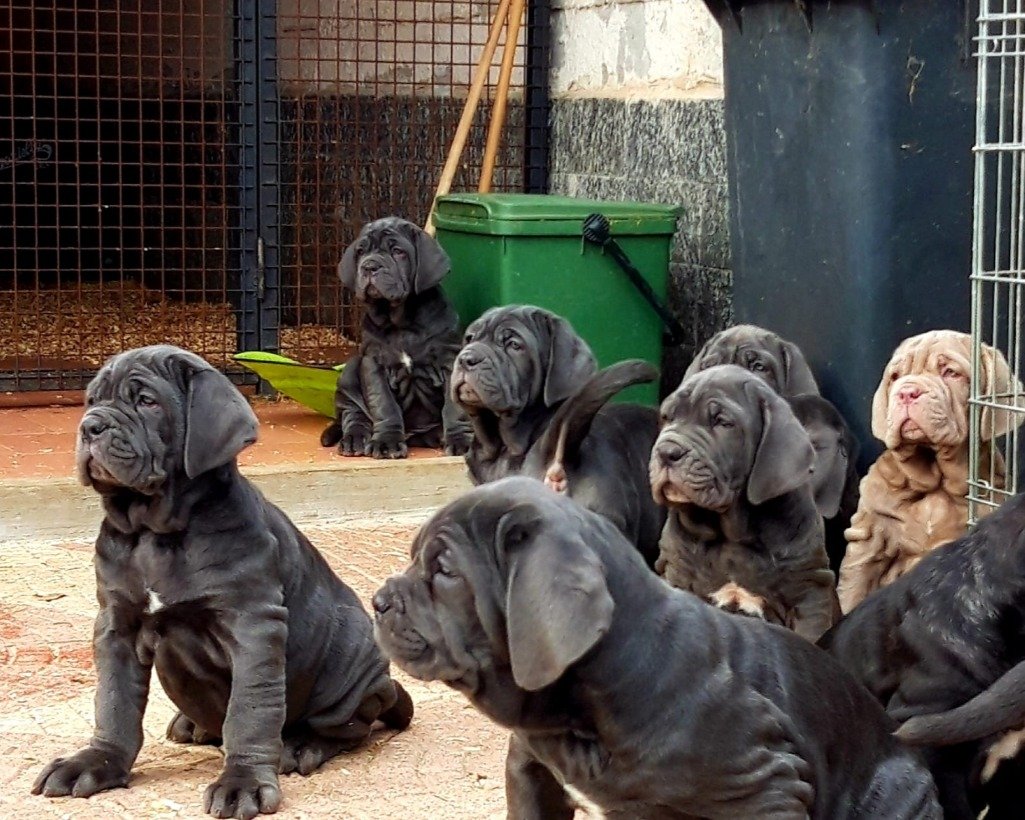 How much does it cost to take home a Neapolitan Mastiff? What is the best price for a puppy? In general, the price ranges between 900 and 1400 dollars (800 -1200 English pounds), in a certified establishment (an option that we obviously recommend).

You must keep in mind that a dog of this size and with this temperament will not be easy to handle. The Neapolitan Mastiff has a lot of energy, so it is not an apartment dog. It loves to be outdoors; however, it does not stand the cold weather.

It is a challenging, loyal and reliable dog. It is definitely an adventurous, yet a bit clumsy, but active and courageous companion. This is the perfect breed dog if you have a house according to its size.

Under this section, you can find the best registered breeders in countries such as: The United States, England, South Africa, Australia, Canada, Ireland, India, Scotland, New Zealand, from whom you can request all the information you need. It is essential that you buy a dog from a reliable breeder so that you can be sure that your puppy has been:

Look For a Puppy 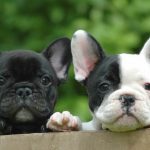 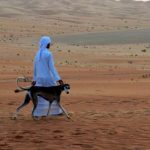